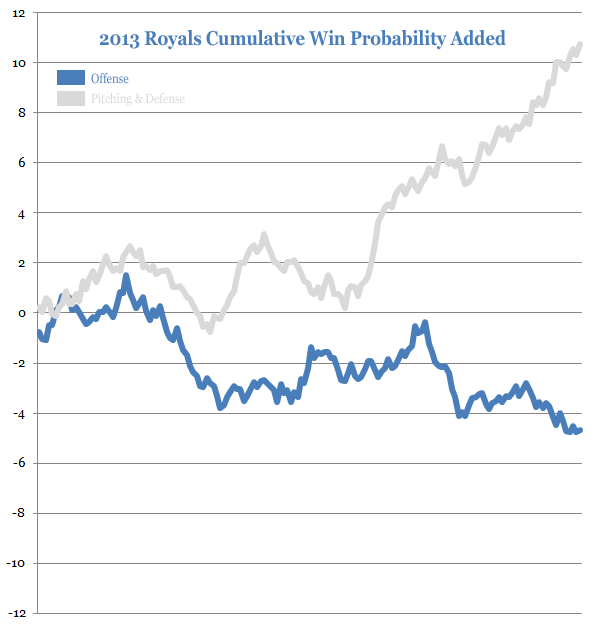 Check out the above graph of the game-by-game accumulation of win probability added by the offense and defense and see if you can tell which one was better for the Royals last year! I'll give you a minute.

Lazy cliche spewers like to say pitching and defense win championships. People more interested in accuracy should try popularizing a new saying, something like, "the right combination of run creation and prevention will get you into the playoffs, where anything can happen." Doesn't have the same ring to it I guess. But the 2013 Royals were yet another example that you usually do have to score a little bit to be a playoff team. And another example that it's hard to score when you don't walk or hit dingers. Here's where the Royals offense ranked in the AL in a bunch of categories:

So pretty much all they did well was avoid strike outs, hit for average, and run the bases. The "little things" that don't contribute a whole lot to run scoring. They were mediocre at getting on base, and completely devoid of power, which led to an 11th place finish in run scoring. There were two stretches during the season when the offense completely disappeared that are glaringly obvious on the WPA chart at the top of this post. Between May 6 and June 4, the offense sputtered out 3.2 runs per game during a 6-22 stretch that effectively torpedoed the season. When the team got on a roll after the all-star break, it seemed as though they had dug themselves out of the hole they dug in May. But while the team deserves kudos for bouncing back the way they did, it's also true that there was never a strong chance for a playoff appearance after May. The offense had another terrible stretch from August 12-24 while their record fell from 62-54 to 64-64.

On the rare occasions that things were clicking on offense, it was Eric Hosmer, Billy Butler, Salvador Perez, and Alex Gordon carrying the load. But on the whole, they couldn't overcome the damage inflicted by out-machines Alcides Escobar, Mike Moustakas, Chris Getz, Elliott Johnson, and Jeff Francoeur. If the offense could have managed to just be league-average, which would have required them to score about 50 more runs, the Royals would have had a great shot at playing post-season baseball.

Finally, here's a look at how some Royals hit relative to their position. Instead of being compared to the whole league, this is OPS+ compared to the other AL players at respective positions: 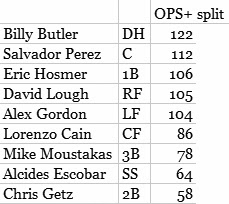 The complaints about Butler from some in Royals-land never look sillier than when you directly compare him to average DH numbers. It's true that all he can do is hit. It's also true that there is a spot in the Royals lineup almost every game for someone to just hit. I personally like having a guy to put into that spot who is an excellent hitter. Call me crazy.
Posted by Aaron Stilley at 4:26 PM No comments:

For the third straight year, Alex Gordon played left field almost perfectly. Seemingly any ball to left that can be caught is, his decision making is impeccable, and Royals fans beg the opposition to run on him. For some reason, they still do, bless their little hearts. Here are his defensive highlights this year from MLB.com.

Read more »
Posted by Aaron Stilley at 7:10 PM No comments:

Trying to choose the best manager is a strange thing. Just going with the biggest surprise team each year is kind of unsatisfying. Who knows how much credit the manager deserves for something like that? But after reading about Maddon in The Extra 2%, following him on Twitter, and getting the sense that he's the perfect blend of a long-time baseball insider who is willing to listen to, and occasionally employ, new school theories, I do know that he would be my first pick to manage my favorite team. He deserves the award this year for this tweet alone:


For those looking for a response as to why we didn’t retaliate today, please read Mario Puzo.
— Joe Maddon (@RaysJoeMaddon) June 30, 2013

No rookie had a truly great year in the AL, but that was mostly due to the Rays delayed call-up of Myers. He put up a 131 wRC+ and looked like he would have been a 4+ WAR player had he been given a full season.

There were two relievers in a class by themselves this year, and choosing between Holland and Koji Uehara is almost impossible. I admit I'm biased as a Royals fan who watched Holland dominate all season. But I think the numbers back up my selection ever so slightly as well. Uehara had a better ERA (1.09 to 1.21), making him a fine choice for this award. But Holland had the upper hand when it comes to peripherals, which take on plenty of significance for me in the small number of innings that relievers throw. Among other things, Holland's jaw dropping 40.4 K% and league-leading 41 shutdowns tip the scales ever so slightly in his favor for me.

Another extremely close call. A good case can be made for Scherzer, Chris Sale, Hisashi Iwakuma, Anibal Sanchez, and Yu Darvish. In the end, Sherzer put together the most solid all-around season, grading out as elite from both runs-allowed and fielder-independent perspectives. Scherzer was also more consistent than the others. I rate 26 of his 32 starts as being good to excellent, more than any of my other candidates. (Scherzer did face easier competition than most AL pitchers, but even adjusting for that, he kept them in check better than anyone else.)

I cannot believe Trout and Miguel Cabrera put on repeat performances of 2012, but here we are. We're all tired of talking about it, but it remains true that Cabrera is the marginally better hitter, but Trout does everything else so much better that Trout is the best in the game right now.

Posted by Aaron Stilley at 9:13 AM No comments: 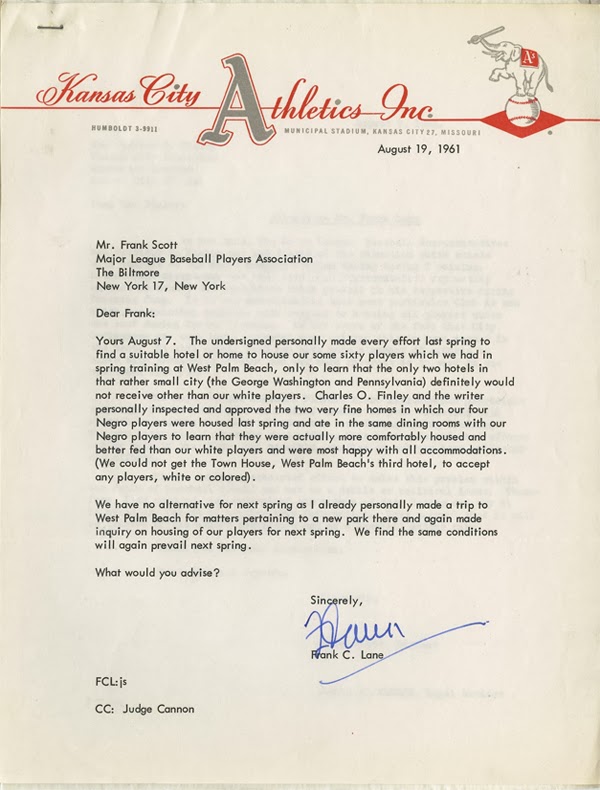 A rather interesting A's artifact from Goldin Auctions. The letterhead alone is pretty great. But the content of the letter is a stark reminder that segregation was still going on in some parts of the country as late as 1961. The A's moved to Kansas City in 1955, and were integrated from the start. That doesn't mean they didn't come face to face with race-related issues, whether it be spring training facilities or an on-field brawl that pitted white vs. black kids after a 1956 game in KC.
Posted by Aaron Stilley at 11:07 AM No comments:

Email ThisBlogThis!Share to TwitterShare to FacebookShare to Pinterest
Labels: Athletics 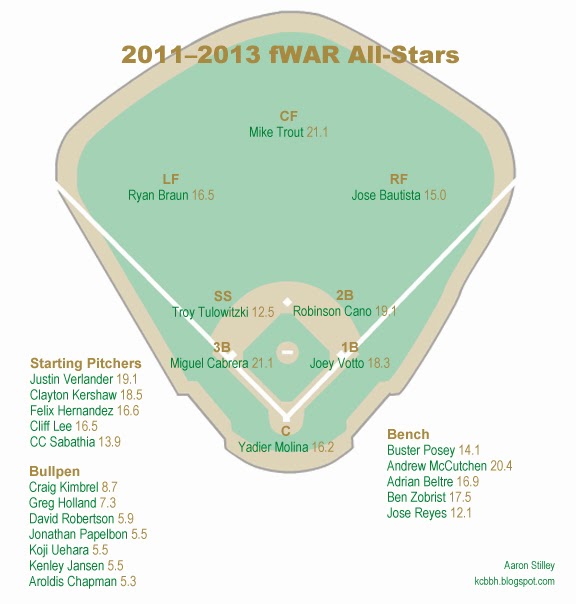 Here's a look at what a team made up of the best players judged by fWAR over the last three seasons might look like. For all the spots except the bench, it's a strictly objective measure of who has the highest fWAR by a player with significant time at each position. I have to use a little subjectivity to put together a sensible bench. The second best catcher by fWAR is obvious, McCutchen as the fourth outfielder is obvious, but then I tried to round it out with super-utility man Zobrist, the second best shortstop in Reyes, and a big bat who can also play the field in Beltre. This leaves off some guys with higher fWAR (most notably Dustin Pedroia and his 17.4 fWAR) just because they don't fit into what I view as the most typical bench construction.

Of course Mike Trout and Miguel Cabrera are tied in fWAR over the last three seasons. Trout barely played in 2011 though, so...yeah.

There is surprisingly little change from the 2010-12 team. Among the position players, Trout is the only new name. He took Josh Hamilton's spot. In the starting rotation, Clayton Kershaw replacing Roy Halladay was the only change. There's a little more turnover in the bullpen: Greg Holland, Koji Uehara, Kenley Jansen, and Aroldis Chapman are in, while Sean Marshall, Matt Belisle, Matt Thornton, and Rafael Betancourt are out.
Posted by Aaron Stilley at 11:53 AM No comments: 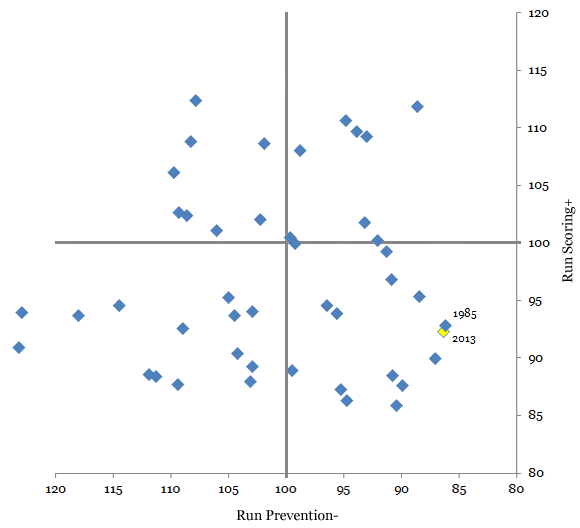 Looked at from a certain angle, the 2013 Royals team was a dead ringer for the slightly more lauded 1985 squad. The above graphic charts every Royals team by run prevention and run scoring as compared to that season's AL average. (The actual formula is (RunsPerGame / ALavgRunsPerGame)*100.) Lower is better for run prevention, higher for run scoring. As you can see, 2013 and 1985 are right on top of each other, and are the two most run-preventingest teams in Royals history. A closer look at the similarities:

Pythagoras would tell you the 2013 team was actually a game better. Here, I'll let him tell you: 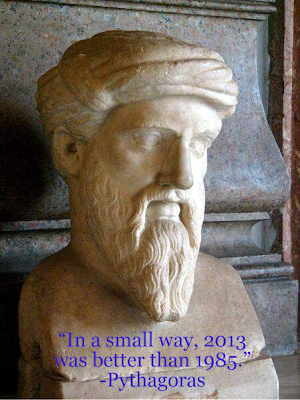 Had the 2013 offense been just league average, Pythagoras would have put their record at 93-69, also known as the Detroit Tigers AL Central winning record.
Posted by Aaron Stilley at 8:54 AM No comments: Posted by Aaron Stilley at 7:58 AM No comments: