In celebration of me re-subscribing to the magical Baseball Reference play index, below are a couple of tables related to Royals starters and win probability added. WPA "records" is sort of a pet junk stat of mine. I keep track of 2012 Royals starters in the right sidebar, with the first number being a start with a positive WPA and the second number starts without a positive WPA. As you can see, Felipe Paulino (4-3) is the only Royals pitcher this year with a winning WPA record. It is not a terribly meaningful measure, but I enjoy seeing numbers that look like the silly, traditional record but with a little more sabermetric oomph behind them. I also like that there aren't no decisions. Does Greinke's 16-8 W-L in 2009 actually represent what kind of season he had? Of course not. His WPA record of 25-8 doesn't completely either, but it certainly tells more of the story. WPA also rewards pitchers who have a good game but don't get run support. Greinke had nine starts in 2009 in which he gave up exactly one run. According to W-L, he was a 5-2 pitcher in those games. According to WPA, 9-0.

Here are the seasons with the most starts with a positive WPA in Royals history:

And here is the all-time Royals positive WPA starts leaderboard:

And on the flip side, here are the seasons with the most non-positive WPA starts:


And the all-time most non-positive WPA starts: 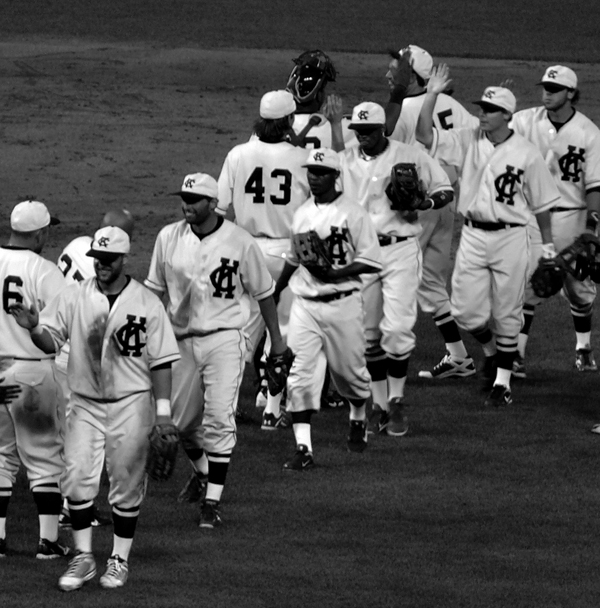 It has been two years since I've been able to do one of these posts. Since the Monarchs and Royals are two of my favorite things in the known universe, I get pretty geeked when the Royals put on the Monarchs unis at Kauffman Stadium. Last night's salute was perfect. The Buck O'Neil bobblehead giveaway is great. It might be the best likeness on a bobblehead I've ever seen, and I love the combo of the Monarchs hat and Royals jacket. The 1921 Monarchs uniforms, a style the Royals had never donned before, looked fantastic. Ray Doswell at the Negro Leagues Museum told me the above picture is the one that the uniforms are based on. (Everyone's except Sylvester Foreman's - why he's wearing a totally different uni I don't know.) I'm willing to overlook one inconsistency - the hats in 1921 were blank, while the Royals had a KC logo - because they nailed the scrumtrelescent striped socks for a change. Some of the jerseys are being auctioned off here, and more have been donated to the Negro Leagues Museum that will probably show up in fundraising efforts in the future.

As for the 1921 Monarchs team, the most-used players on the roster looked something like this:

Hall of Famer Jose Mendez, 36 years old, also played sparingly in a utility role. After going through some unsatisfactory catchers early in the season, a trade was made with the Chicago American Giants that brought KC native Frank Duncan to the Monarchs (source). Duncan had a great defensive reputation, and became a major Monarch stalwart. He spent most seasons between 1921-47 as the Monarchs catcher, managed them from 1942-48, and umpired home games for many years after that.

The team was just in their second season, and in the middle of three years spent with Association Park as their home field. The playing field is still there at 20th & Prospect (the city calls it Blues Park now): 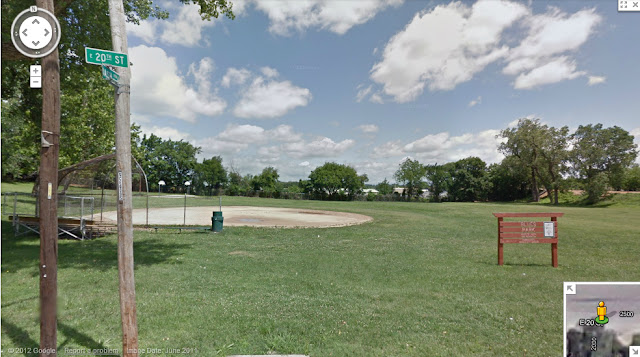 Depending on the source, they had a record of 50-38, 50-31, or 73-43 and finished 2nd or 3rd in the eight-team Negro National League. Judging by the numbers researchers have uncovered, Hurley McNair, George Carr and Dobie Moore were the heavy hitters, and Bullet Rogan and Rube Curry were the staff aces.

The 2012 Royals had a good game, pecking away on offense and scoring runs in five of the eight innings they batted. Starter Luis Mendoza pitched well, and Lorenzo Cain paced the offense with two singles, a double, and three RBI.

You can find photo galleries from the game here, here, and here.

Below are some photos I took.

Read more »
Posted by Aaron Stilley at 3:48 PM No comments:

Email ThisBlogThis!Share to TwitterShare to FacebookShare to Pinterest
Labels: Royals in Monarchs Duds

Royals WPA at the Break 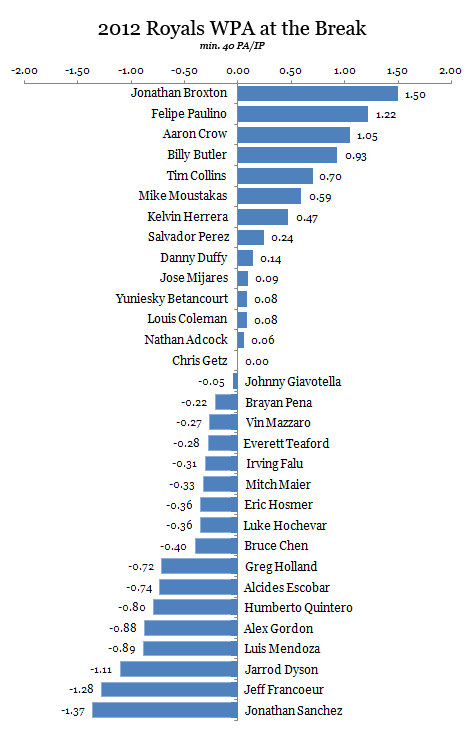 Closers get a boost from the opportunity to get the last out regularly, so Broxton's number is a little inflated

The only surprises for me are Alex and Yuni. Alex's wOBA is .339 to Yuni's .296, but Yuni has come through at better times. That's an understatement - in whatever Fangraphs defines as high leverage situations, Alex has a wOBA of .212 compared to Yuni's .448. I wish I could totally dismiss that as a small sample fluke, but Alex has a career-long, large sample problem with high leverage. Here are both players' wOBA in low, medium and high leverage situations this year and for their careers:

Posted by Aaron Stilley at 2:32 PM No comments: 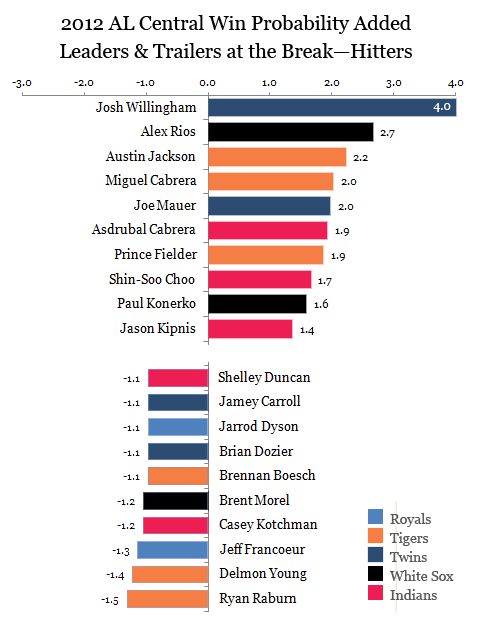 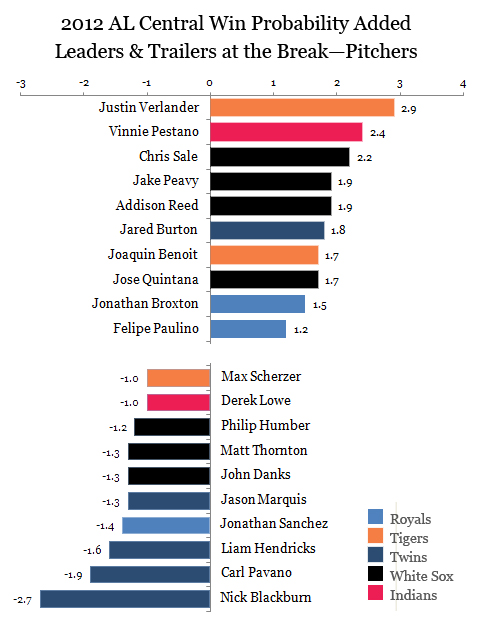 Every other Central team has at least one hitter and pitcher with a higher WPA than the Royals leader. Billy leads Royals hitters with .9 WPA.

Posted by Aaron Stilley at 8:48 AM No comments:

AL Central's Best Bats In The First Half 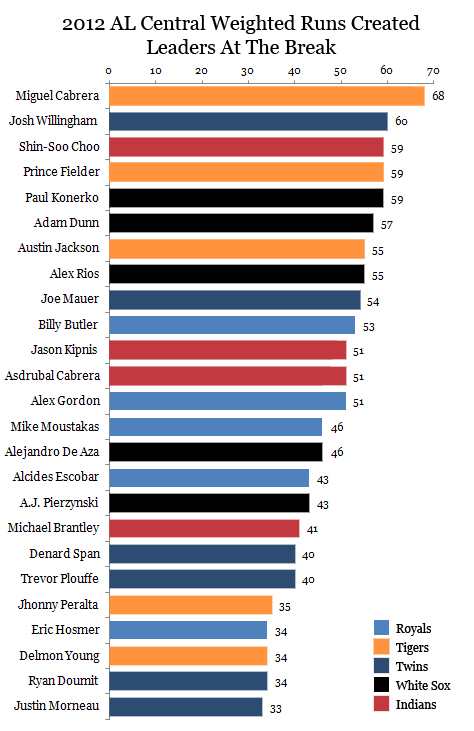 Billy Butler, the Royals most productive hitter so far, comes in at only 10th in the division. Every other AL Central team has at least one hitter with more weighted runs created, and the Tigers and White Sox each have three hitters above Billy.
Posted by Aaron Stilley at 7:13 PM No comments:

Since I expected the Royals fortunes to depend heavily on their starting pitching this season, I've been keeping a close eye on how it has been comparing in the AL Central so far this year. (That expectation hasn't exactly been correct of course. The Royals offense has sputtered and has been almost as much of a problem as the starters have been.) Here's how the teams are stacking up at the All-Star break:

The Tigers and White Sox starters have been in a separate class all season long and have pretty similar numbers across the board. The White Sox rank either first or second in every category on my chart. The Royals starters have been bad, but the Twins numbers are really painful. If xFIP is any indication, they've been terribly unlucky in addition to being bad. Their win probability added is the craziest number on the chart.

Here's a look at the WAR of the individual pitchers in the Central who have made at least five starts. The number is the average of the pitcher's fWAR and rWAR, meaning it meets in the middle of Fangraphs' FIP-based number and Baseball Reference's runs allowed-based figure. 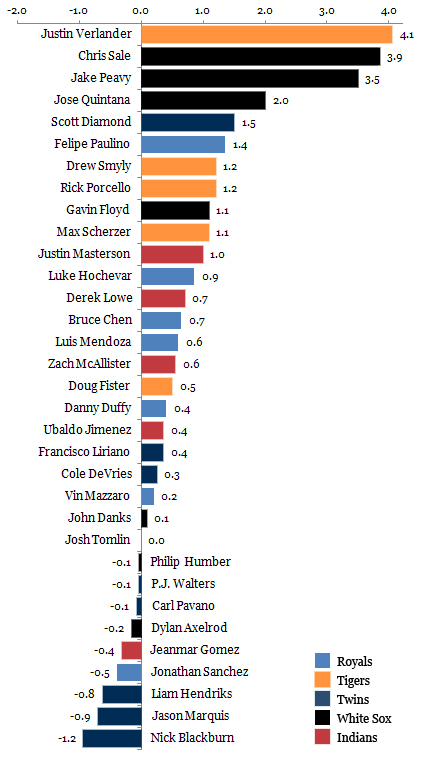 The Tigers and White Sox each have four pitchers in the top 10. Hard to believe the Twins have THREE pitchers rating worse than Jonathan Sanchez. I miss Felipe Paulino, you guys.

Here is a graph looking at the game scores of Royals starters. The thin line is every game score, and the thicker line is a rolling five game average: 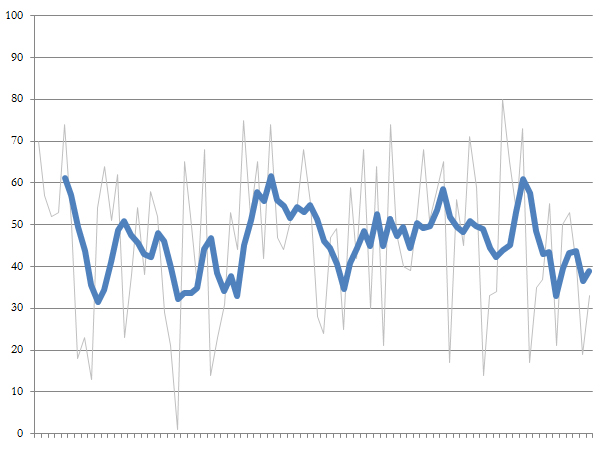 Keeping in mind 50 is average, they were pretty terrible for the first 31 games, then found a completely acceptable level of mediocrity for a pretty good stretch before stumbling over the last 10 games or so.

One more. This one is the game-by-game accumulation of win probability from each Royals start: 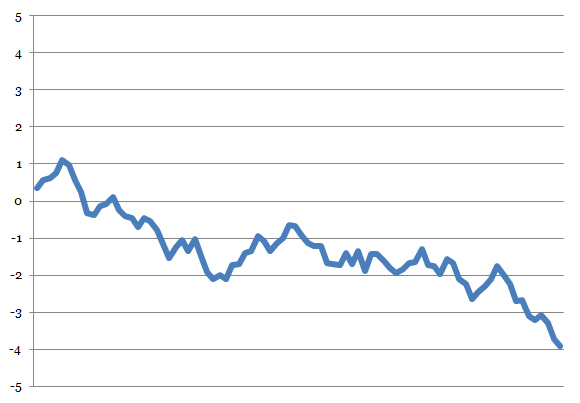 It tells the same story as the previous chart: terrible start, a leveling off, then awful again leading into the break. Overall a definite downward trend pointing to lots of losses.

The Royals needed their starters to stay healthy and have a couple of break-out performances for there to have been any hope of contention this year. Neither of those things has happened.

Finally, from Fangraphs' pitch values, here are the nastiest of a few pitch types in the division:

Posted by Aaron Stilley at 1:44 PM No comments:

Jim Baker posted this item on the teammates subset of cards from the 1967 Topps set. Topps neglected to issue teammates cards for nine MLB teams, including the fightin' Kansas City Athletics. Baker suggested the nine cards that should have been, including a KC Killers card featuring Ed Charles and Danny Cater. I didn't really want to live in a world without that card, and since we have the technology now to create the cards we would like to see, I fired up the time machine, headed to 1966, and convinced the Topps brass to put out such a card. I requested that the players stand awkwardly in relation to each other in the photo. Then I came back to the present, headed to my neighborhood card shop, purchased my KC Killers card and scanned it up for the intertubes. You're welcome humanity. 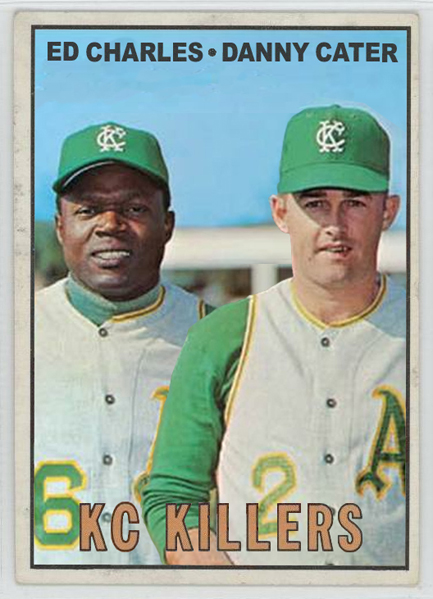 Posted by Aaron Stilley at 10:26 AM No comments:

Email ThisBlogThis!Share to TwitterShare to FacebookShare to Pinterest
Labels: Athletics

Pleased to be clicking here for your all your July desktop needs.