The 1969 MLB expansion class of the Montreal Expos/Washington Nationals, Kansas City Royals, Seattle Pilots/Milwaukee Brewers, and San Diego Padres have wrapped up their respective 45th seasons in baseball. Only the Royals and Padres have weathered the years in the same city. The Pilots lasted all of one season in Seattle before relocating to Milwaukee, while the Expos spent 36 years in Montreal before shifting to DC for the last nine. As for all-time records, the Padres bring up the rear with a .464 winning percentage, and the other three clubs are bunched up between .478-.481: 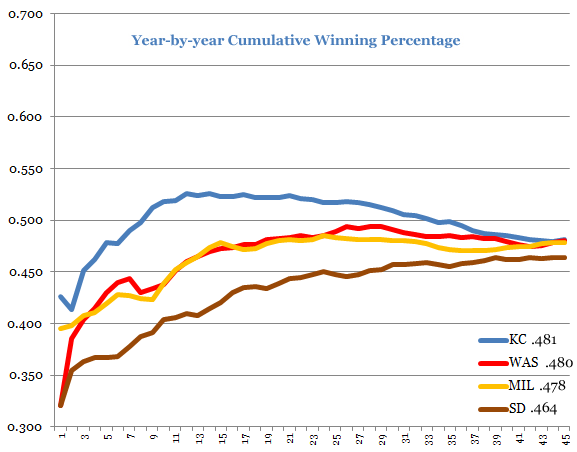 Despite the futility of the last two decades of Royals baseball, they have always retained the best all-time record among the '69ers. The Nationals are starting to nip at their heels though.

More importantly, the Royals have also tasted by far the most playoff action and success:

So while things couldn't have been much worse in the recent past for the Royals, we are fortunate to have had the glory years of roughly '71-'89. The other three clubs have had good to great years, but nothing approaching the sustained success of those Royals teams.

When the four teams play each other, the Royals again come out in front with the best winning percentage. As the only team remaining in the American League, they don't see the other '69 babies too often anymore, but they really beat up on the Brewers when Milwaukee was still an AL town:

Read more »
Posted by Aaron Stilley at 12:20 PM No comments: Posted by Aaron Stilley at 4:00 AM No comments: