There's been plenty of talk around the interwebs about the Royals abysmal home run numbers to start the 2014 season, as well as their impotence throughout their history: Mike Engel did a great breakdown of KC homer rates at home and on the road and in different eras, Engel also discussed the topic with Jeff Herr on the KC Baseball Vault, Rob Neyer chimed in, and JoePo revisited the infamous Balboni record. As if more needed to be said on the topic, I started poking around at how their homers have broken down by ballpark. Here's the top ten by total homers:

More interesting are the home run rates by stadium. The Royals have had at least 500 plate appearances in 30 different stadiums. Here are their rates at all of them: 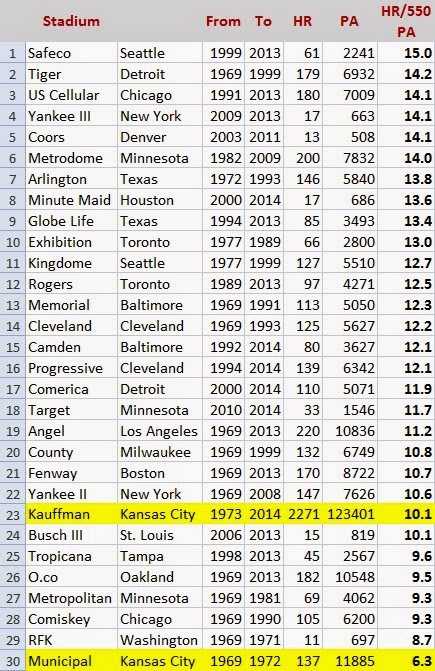 Safeco?! Safeco has been as much of a homerun graveyard as Kauffman until the fences were moved in last year. 33 Royals have homered in Safeco, with Raul Ibanez and Mike Sweeney leading the way with five apiece. I suppose it's mostly a fluke, but it's also more proof that it's not impossible to hit homers at a reasonable rate in big parks like the Royals sometimes seem to suggest. None of the current Royals have done much damage at Safeco: Alex and Billy have two, Hosmer one.

At first I was surprised to see Municipal at the bottom, but then I remembered there was no DH those years and of course they were an expansion club. Ed Kirkpatrick, with 26, was the only player to hit even 20 homers combined in the four years at Municipal. Bob Oliver, Lou Piniella, John Mayberry, and Amos Otis were the only others with 10 or more. The run scoring environment was neutral at Municipal, but I don't know exactly about home run factors. I believe the LF-CF-RF dimensions when the Royals played there were 369-421-328, so there were certainly no cheapies to be had.

Fenway and Yankee II are both a little lower than I'd expect considering the short dimensions in left and right respectively. They've hit dingers at a much higher rate at Yankee III in the short time it's been open.

And not surprisingly, but sadly, Kauffman is way down at 23rd on the list. Like you already know, Kauffman is indeed a tough park to homer in, but it's not as tough as the Royals have made it look. Visiting teams consistently out-homer the Royals in their own ballpark. According to Engel, the Royals have homered once every 54 PAs in Kauffman history while their opponents have gone long once every 46 trips to the plate. In the words of GOB Bluth, "Come on!"

5/13 Update: It occurred to me after posting the above that it is probably more instructive to limit the data to the DH/Kauffman era, so here are the Royals homer rates by stadium from 1973 through today. Ignoring '69-'72, Tiger Stadium takes over the top spot, while Safeco strangely remains at the top of current stadiums. (The Royals hit two dingers in three recent games at Safeco, which actually dropped their all-time Safeco rate.) 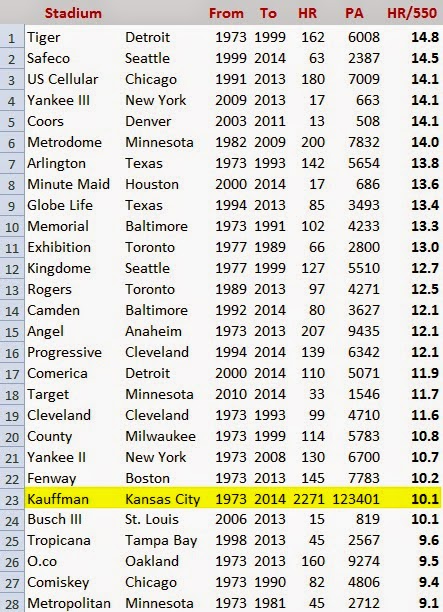 Posted by Aaron Stilley at 8:47 AM No comments: 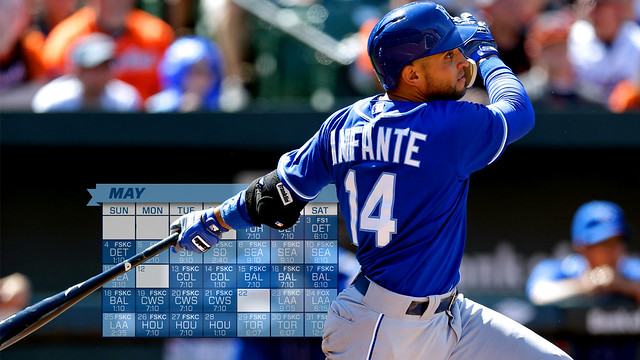 Posted by Aaron Stilley at 7:28 AM No comments: