a "win" is a start with a positive win probability added
Posted by Aaron Stilley at 6:35 AM No comments:

Jeff Francoeur has had a fantastic year. With his 20th ding dong against the White Sox tonight, much was made about him joining the 20HR/20SB club, something that only three other Royals have done (Amos Otis, Bo Jackson and Carlos Beltran). So yeah, quite a few homers and swipes for Frenchy. But has Francoeur really had such a good year on the basepaths? One of my biggest baseball pet peeves is how stolen bases are routinely only mentioned as a total of successful attempts, ignoring how many times the player was caught. If you only know the number of successful attempts, you do not know much.

If I'm crunching the numbers from this page correctly (no sure thing), the average stolen base from 1969-2010 was worth .200 runs, while the average caught stealing was worth -.408 runs. Multiplying those values by stolen bases and caught stealings and adding those totals together, you can get an overall run value for stolen base attempts. It has taken Frenchy 32 attempts to get to 22 steals, good for a whopping run value of .3. If he had gone 2-for-2 on stolen base attempts, no one would be talking about it, but it would have helped the team more than going 22-for-32.

Still, it has been somewhat of a rarity for a Royals player to hit 20+ home runs and have a positive run value on stolen base attempts. Frenchy and Alex are both doing it this year, barely. If they can finish the year in the black for stolen base runs, it will make 28 such seasons in Royals history. But don't make the mistake of thinking Frenchy is reaching the same plateaus Beltran, Otis and Bo did.

Municipal Stadium Marker Is Back!

In April, 2010 I discovered that the Municipal Stadium historical marker had disappeared from 22nd & Brooklyn. Uni Watch also reported on it. Jeff Logan of the KC Baseball Historical Society tried to find out what the story was without satisfying results, but he got the impression the sign was in Parks & Recreation storage with no plans for it to be returned. I emailed city councilmen asking for info and/or help without any response. I drove by the spot again sometime in the winter of '10-'11 and the sign was still gone.

But today I swung by the corner again with no hope of seeing the sign--but it was there! Twitter e-migo @KC22ndBrooklyn tells me he saw the sign this past spring, so it has been back for a little while. It has been moved slightly from its previous position, and is anchored in dirt and grass instead of cement. One of the two benches that used to be there is back. Perhaps the plan all along was for the removal to be temporary while the corner was redone. In any event, it is a relief that the sign has been returned to its rightful spot, honoring the most hallowed patch of land in KC baseball history. 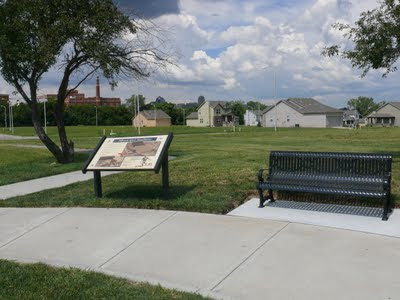 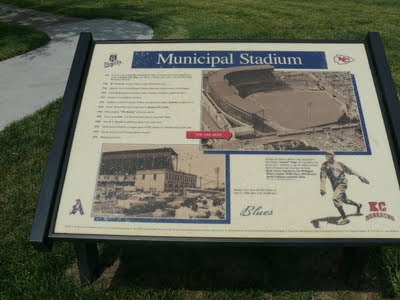